Chicago Beau (L Beauchamp), was born on the southside of Chicago on 13 February 1949, into a house of music. The recordings of Dinah Washington, Coleman Hawkins, Miles Davis, Billie Holiday, Duke Ellington, Ella Fitzgerald, Ivory Joe Hunter, Ruth Brown and others, were a part of his childhood world from the beginning.

From the age of 10 until 15, Beau studied tap dancing with the great Afro-Cuban dancer and choreographer, Jimmy Payne. He participated in many Cabaret-type shows that were popular during that era. A show could consist of performances by Afro-Cuban dancers, magicians, tap dancers, Jazz and Blues performers, and drill teams. These shows gave young people the opportunity to participate with professionals in a community setting. There was little distinction in the taste of the audience, people of all ages appreciated the same talent.

Beau was becoming quite a tap dancer (sometimes still used in his shows), but it was the Blues and Jazz elements of these shows that really held his interest. He became so interested in Blues that he began sneaking around to Blues clubs after school to listen to Blues bands rehearse. On the famous 47th street, he would slip into the 708 Club that sizzled at night with artists like Muddy Waters, Howling Wolf, Sonny Boy Williamson, Big Mama Thornton, Little Walter, and Billy Boy Arnold. Up the street from there was the Sutherland Lounge which featured Jazz and Blues acts such as Ella Fitzgerald,Joe Williams, Esther Philips, Louis Armstrong, Von Freeman, E Parker McDougal, Louis Armstrong, Dexter Gordon, Dizzy Gillespie, Chico Hamilton, Philly Joe Jones, and many more.

Little did Beau know at the time that some of these performers he watched and listened to would have a permanent impact on his life: Billy Boy Arnold gave him harmonica lessons (they later recorded together), and Muddy Waters gave him his name, 'Chicago Beau.'

After spending three years from the age of 17 playing harmonica and singing in small clubs, mining and logging camps, and on street corners from Chicago, to Boston, to Nova Scotia, to Amsterdam, he moved to Paris where he met, performed and recorded with Archie Shepp in August 1969, at age 20, on the Shepp album, Blasé.  Beau considers the first recording with Shepp to be the beginning of his professional career. Two months later, Beau and Shepp would collaborate on another recording project with compositions by Beau and others titled, Black Gypsy, on the America Records label.

Chicago Beau received the CLIO Award along with Halldor Bragason, the American advertising industry's highest honor, for their music that was used in the 1991-92 National Basketball Association Champions, Chicago Bulls, cable television campaign.  On March 19, 2016, Beau was made an Honorary Member of The Reykjavik Blues Society.  Because of the interest and enthusiasm of Icelandic guitarist, and organizer, Halldor Bragason,  Beau introduced The Chicago Blues in  Iceland in 1991.  Beau and Bragason collaborated on numerous projects including recordings of Jimmy Dawkins, Pinetop Perkins,  Billy Boy Arnold, Dietra Farr, and others; and the production and performance of concerts in Sardegna with Italian promoter, Isio Saba.

Chicago Beau is committed to the literary side of Blues culture. In 1988 he founded Literati Internazionale, a publishing company dedicated to multi-culturalism. To date, his company has published twenty journals, books, and magazines that include the works of over 100 writers and artists.  Among them: Pulitzer Prize Poet Gwendolyn Brooks, Alejo Carpentier, Kalamu Ya Salaam,Eugene B. Redmond, Deitra Farr, Hart Leroy Bibbs, Amiri Baraka,  Beauford Delaney, Henry Miller, Margaret Walker,  J. P. Donleavey, and Quincy Troupe.

Beau recently completed Book One of his Autobiography:  TOO MUCH UNCONVENIENCE - Recollections of a Blues Gypsy.

Beau lectures at universities, schools, and music festivals on various topics including, The Evolution of Blues as Music, Language,  Literature, and Lifestyle.  Heis currently teaching Creative Non-fiction, at Harper College in Palatine, Illinois; and touring with his BLUZ-MULTI-GROOVE CONFIGURATION: CHICAGO BEAU AND HIS WONDERFUL TIME BAND. 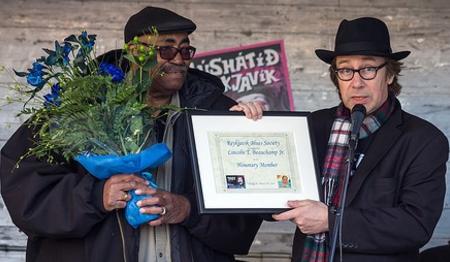 Founded and Published by